Well, it’s now well over 3 weeks post-Carmel and I’m finally starting to process the race and the weekend. A few days before the race, I wrote that I wanted to give a solid effort and not focus as much on the time on the clock. Coming off my stress fracture in the fall, this training cycle was already a success. I committed to the training in a relatively mild but difficult Chicago winter and surprised myself (and Coach Dan) with plenty of runs longer than 16 miles. (My “long run” was only up to 9 miles in January…) Making it through the cycle with a smart build-up and few aches and pains was such a relief. I was myself again!

So race day was to be icing on the cake – an ‘exclamation point on the training cycle’, if you will.

It didn’t quite turn out that way and it’s taken me a few weeks to understand why and to explain why I’m not upset about it. Long story short, by the time I got to Mile 10, I realized that I was already starting to overheat. This isn’t the first time I’ve started to salt out so early, as Boston 2014 was almost exactly the same experience. I saw Glenn Hein at the start line and realized he was pacing the 3:15 group. I thought I’d hang behind them for a bit and then maybe latch on later in the race. 3:15 sounded doable, but tough. I ended up running closer to 7:30 min/mile for the first 10 and I could probably blame that for overheating so early. My plan was to stick closer to 7:45 and then gradually work my way down. No matter how many races you run, I think you’re always in danger of overshooting by 10 seconds per mile— and that’s energy that you should conserve early on. We all have that number in our head – the pace that *should* be easy on race day. But every cycle is different and our bodies usually tell us far before we realize what’s happening. I think in cases like these, we choose to ignore those signs. After dumping water on my head and taking sips of water at almost every single aid station (I think I only missed one), I was still hot at Mile 11-12. When I turned the corner and realized that the 13.1 timing mat was on the ground, I made the quick decision to call it a day. I debated dropping at the half for a good 3-4 miles before it actually happened.

And just like that ‘Lucky #7 marathon’ turned into my first DNF in the marathon. I walked over to a volunteer to make sure I was headed the right direction, toward the finish line and gear check. Thankfully, I stopped at a convenient place on the route because the trot back to the finish area was only about 1.5 miles. I unpinned my bib from my singlet, rolled it up in my hand, and jogged back to the finish area.

In every other half marathon or marathon I’ve ever raced, I think that I’ve been more emotional about the race itself. When I DNF’d that day, I wasn’t upset. Normally I would be crying and really disappointed in myself. I’m not sure how to explain this other than to say that it just wasn’t my day. I shouldn’t have felt like I had run 20-22 miles at the halfway marker. I should have been in a pace groove and anxiously waiting for the chance to run just a wee bit faster.

Why is it that factors that go into a poor race experience always feel like ‘excuses’? I think most runners, myself included, feel like you need to be a superhuman and overcome whatever obstacles come your way. Some days, I think we can. Some days, you can’t…but that doesn’t mean that you have to beat yourself up about it. Looking back, I can say that there were several big factors that resulted in a poor day to race. First, I was PMS’ing HARDCORE before Carmel (increased body temp, etc.). I felt off all week. Second (and most importantly), life dealt me and The Man the worst card before the race. A death in the family meant that we slept very poorly and we were emotionally exhausted for an entire week. It’s bad enough when you lose someone, and it’s arguably twice as exhausting when you see someone you love so much go through something so difficult. I didn’t sleep more than 5 hours per night until Thursday that week and I spent most of race week trying to catch up, put the pieces back together, and be somewhat productive at work. I underestimated the toll that grief and emotional exhaustion would take on race day.

The training cycle for Carmel had a whole lot of LIFE happening. I started a new job, put my running legs back together post-stress fracture, experienced a loss, and dared to dream about a perfect race day.

So Carmel wasn’t Lucky #7 when it comes to the race. But I am one lucky woman.

After I got back to the finish area and borrowed a stranger’s phone to call Manny, who was anxiously waiting for me on the course, past the halfway point, some more LIFE HAPPENED.

Manny, my mom, and my sister walked up to the area where I was stretching in the grass. Knowing that I’d probably be emotional and upset, they all asked “what happened?” and “are you ok?” several times. I explained that it wasn’t my day and that I *genuinely* wasn’t upset about it. I just wanted to go back to the car, change into my dry clothes, and grab a beer with friends and family. It may not have been a good day to race, but it was definitely the perfect day to enjoy some warm sunshine and relax with people I love.

The one person that kept asking me if I was okay — incessantly! — was The Man. After the 5th or 6th time, I said, “I promise! I’m fine, Manny!”. And in hindsight, I can understand why he asked so many times.

Because, as I was in the process of taking my shoes and compression socks off by our car, he told me that he’d had something planned that morning. I asked him nonchalantly, “what did you have planned?” and he proceeded to get down on one knee and ask me to marry him. I was standing there with tears streaming down my face, salt on my forehead, and in complete disbelief that this was happening. Of course, he had a plan and I completely messed it up by not finishing the marathon. 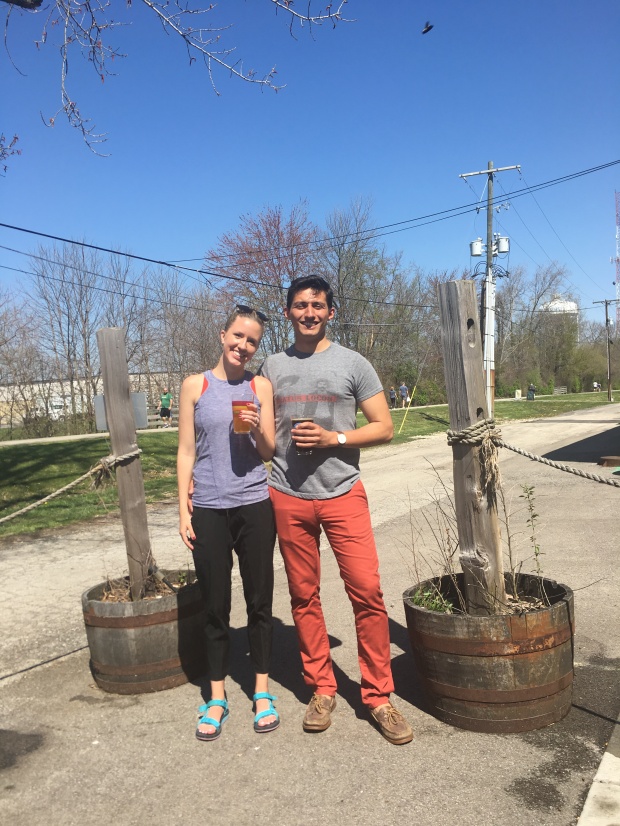 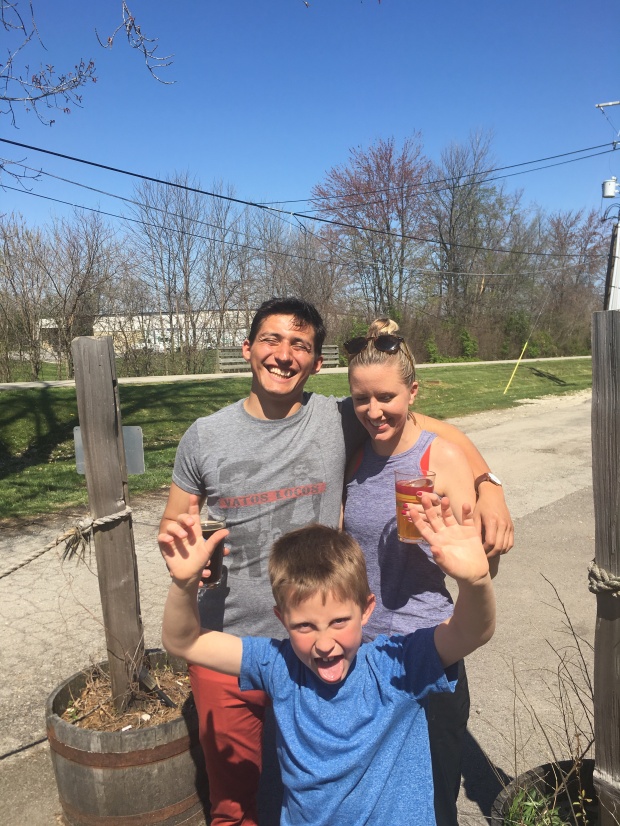 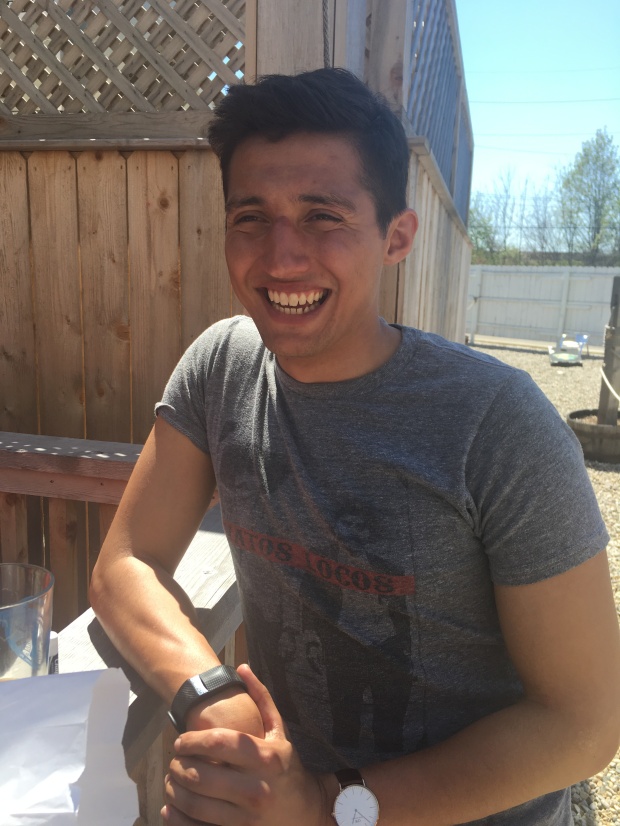 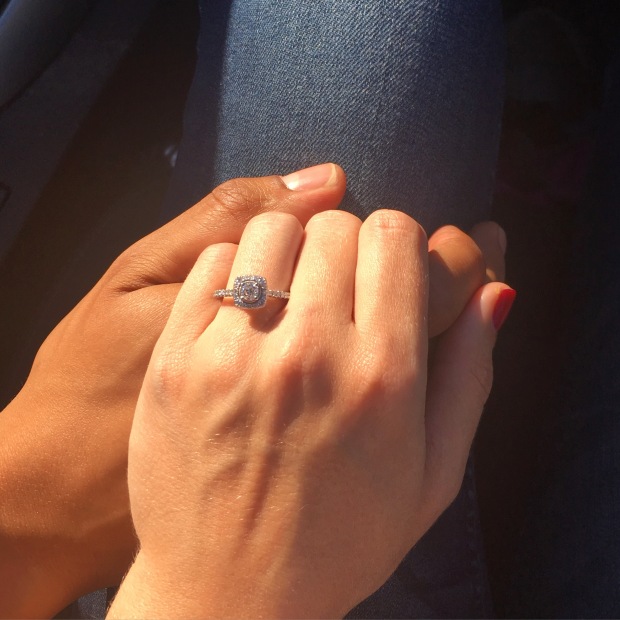 Carmel wasn’t Lucky #7 because of the race. It was Lucky #7 because Manny and I get to spend the rest of our lives together. That’s bigger and way more important than any race I have ever or will ever run. But I’m sure there are plenty of races in our future, too. Two “firsts” in one weekend. That’s life. 🙂

What I learned at Carmel:

– Love the good days, learn from the bad days. Don’t beat yourself up about life and BE OKAY with *not* being superhuman.
– Just because you didn’t run 26.2 miles doesn’t mean that you won’t get a blood blister or two.
– 10 seconds per mile is substantial. Cool your jets!
– Just because The Man has ruined every single surprise he’s ever planned in the 9 years we’ve dated, doesn’t mean that he’s incapable of surprising me when it really counts. 😃

6 thoughts on “A Race Recap Unlike Any Other: Two “Firsts””