3 weeks post-fall and everyone (including myself) is likely sick of me talking about the bum knee. The good news is that it’s run its course and I’ve been pain-free for about a week now.

The last update chronicled the progress I made within two weeks of falling. I was pretty optimistic about the inflammation in the bursa going down on its own and doubted that I would need the doc to give me a cortisone shot. After resting through the two-week mark (with a fair amount of pain-free cycling to keep me from going absolutely insane), I went for a 20-minute test run with Corey last Sunday. It’s tough to describe what it felt like but it didn’t really feel good and it didn’t really feel bad. Just “meh”. That’s not really the feeling I was hoping for. So, I emailed my doc that afternoon to let her know how the knee was doing and this was her response:

I think it would be good to get an MRI of the knee to confirm that there is nothing else going on. I would hate to do a steroid injection if there was an underlying fracture or tear.

I was a bit disappointed about it but knew the MRI was the right thing to do. And she heard my message about wanting to clear this up ASAP loud and clear because we were able to schedule an MRI for the next day and she just happened to have an available appointment on Tuesday. So, fingers crossed– all would be resolved (or at least we would know more) by Tuesday at 9 am.

Fast forward to the appointment. (cue nervous jitters in the waiting room) Prepatellar Bursitis was the correct diagnosis. I was so relieved. The doc showed me basically every image of the MRI and said that my knee looks really strong (no damage to ACL, MCL, etc). Apparently I fell squarely on my bursa and that cushioned the fall for my patella. Two minutes later she gave me a cortisone shot to reduce the inflammation and five minutes later I was sauntering out of the doc’s office with a goofy smile on my face.

And then. I bought a white chocolate passion fruit donut to celebrate. Necessary.

The “bad” news? She prescribed more rest through the end of the week. So that would total 3 weeks of no running and a heck of a lot of frustration. The GREAT NEWS?! I was 95% pain-free by the next afternoon and I was finally able to sweat on the bike last week. I did 5 hours of cross-training and even did a two-hour session on Sunday to replicate a long run (1 hr spin bike, 1 hr open stride machine). For anyone that’s ever used the Open Stride machine, can we talk about how tough of a workout that can be?! 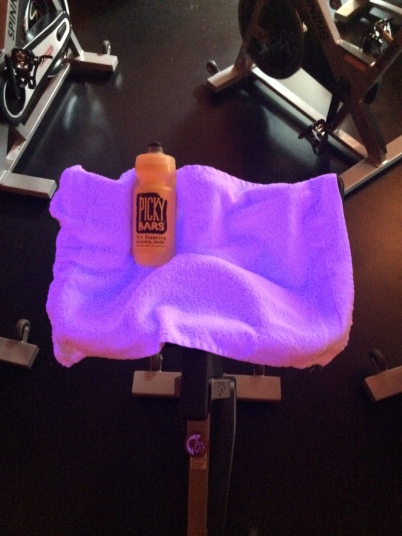 Missing the lakefront path like crazy, but happy just to be able to SWEAT!

So, this is all to say, that TODAY I get to run! My right knee cap looks identical to my left knee cap (gasp!) and I feel like my normal self again. Like any injury, I’m still really paranoid that the pain will return. I find myself doing normal things throughout the day and wondering if my knee will hurt if I ____(fill in the blank)_____.  This injury has been anything but normal–and I may never live down what a clumsy fall that was. I’m going to stay patient the next few weeks and just see how running goes. As of today, I have 12 weeks to Monumental. And while I know I would be well on my way to a strong training cycle had I not taken this bad fall three weeks ago, I think I’ll give this cycle a shot.

Tell me your ‘falling while running’ stories!

14 thoughts on “Bum Knee Be Gone! Back To Regularly Scheduled Programming”