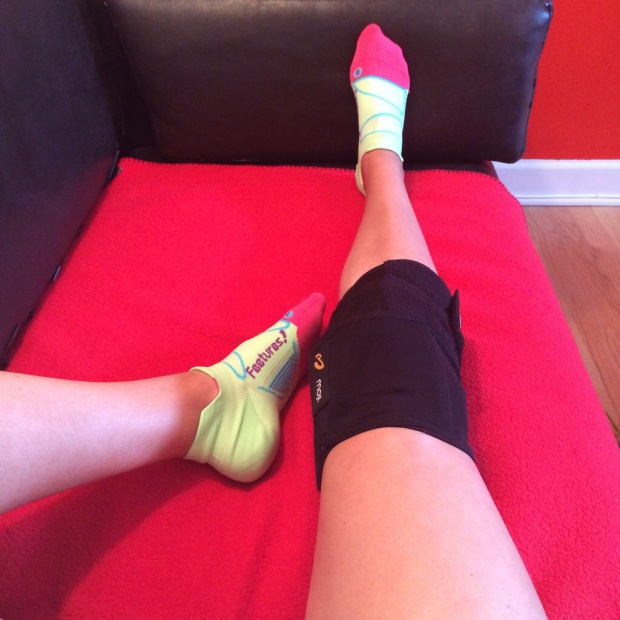 This isn’t exactly how I saw the first week of official training going. In fact, I was pretty excited about the work I put in last week and I was going to cap it off with a 15 miler. I started late after a lazy Sunday morning. The Man and I have been running the 2 miles to the lakefront together as a warmup before our own long runs. It makes the trip to the lake more fun. There’s a section of this street that I’m always careful on. I cross a small set of train tracks, being careful with my footsteps. And, after that, there’s this section of gnarly pavement. It’s been this bad as long as I’ve been running this section (which is about 1,500 times in the past 3 years). I wasn’t paying attention this time. I’ve run it so many times that my brain must have switched off.

My left toe clipped the ledge of this “sidewalk pothole” and, with 100% of my weight, I fell straight down on my right knee cap. Cue immediate pain and lots of tears. It hurt like hell and I was just sitting there howling. Manny said I bounced I fell so hard. And thank goodness he was with me. With all the adrenaline after falling, I thought the best thing to do was to loosen it up… by jogging slowly the 4 blocks back home. I had blood running down my leg and I couldn’t stop crying.

I spent the rest of the day being a big baby, icing my knee, and watching episode after episode of Orange Is the New Black. An hour after the fall, it was really swollen and I had a very, very limited range of motion. Bending it or straightening it didn’t feel good.

Two days later and some of the swelling has gone down. I can bend it very slowly (still painful and uncomfortable) and it feels better when I keep it loose. If I sit in one position for awhile, it gets cranky. A 4 hr flight on Monday was less than ideal.

So, what do I do now? I am traveling this entire week and won’t be home until late Friday night. If it’s still this painful, I’ll head to the doc. I’m encouraged by the fact that my range of motion has improved from Sunday-Monday. I’ve been icing it every couple of hours and taking Ibuprofen regularly. I can’t help but wonder if it’s something serious but I’ll take it day by day and see how I feel at the end of the week.

Note: I find it somewhat hilarious and ironic that a Chicago pothole has caused this fluke injury.