It appears that when you’re not training for a specific race, you’re less motivated to update a darn blog! But I promise, I still have lots to say and I’ve been staying busy (maybe too busy at times?). It’s definitely weird to experience the fall racing season as a spectator but I think I enjoyed it much more than I thought I would 2 months ago when everything started to go sideways. In fact, I think that I forgot about the whole “I’m not racing this fall” and replaced it with “my job is now spectator extraordinaire”, which basically meant that I went to expos for races I wasn’t running, tracked a bajillion friends racing in multiple marathons, and carb-loaded like I was the one actually running the race (which, I mean, isn’t really that big of a surprise, guys. The RUNGRY will always prevail). So, a recap of 3 big race weekends:

The Grand Rapids Marathon was on October 20th.

Despite it being my “A” race this fall, spectating the Grand Rapids was a special experience. The Man ran his first half marathon there after a very consistent training cycle (that was loosely put together by moi.) You only get one first half marathon and the experience of training can be so rewarding–the fact that you can return home from each weekend’s long run and say “that’s the farthest I’ve ever run in my entire life” is amazing. The Man and I took advantage of that pretty much every Saturday by celebrating over more than a few beers and “brunch” at 2 or 3 pm on Saturday afternoon. It was especially nice to be able to live vicariously through his training when I made the decision to not race this fall. I’m glad I was able to be part of his finish line experience because, had I run the marathon that day, I would have missed the finish of his first half marathon. 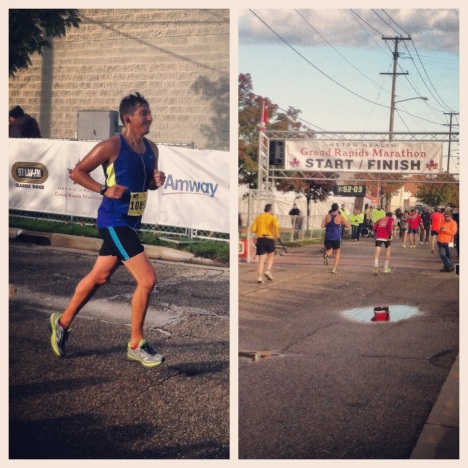 Look at that form!

I remember standing at the finish with my family when my mom asked what his goal was. He told me anything under 2 hours would make him happy, BUT (as I learned after he finished) his “real goal” was around 1:50-1:55. He’s sneaky like that! I stood there anxiously waiting to cheer and take pictures, thinking that I’d realistically have 10 minutes to wait before he came through. And two seconds later, we spotted him. I looked at the clock and he realized he would finish MUCH closer to 1:50 than 2 hours—clearly this was a good day for him. I’m so happy I could be at that finish line. Hillary & Jeff ran the marathon that day and managed to see both of them near Mile 4 before they ran off into the park and I parked my butt at Starbucks to warm up a bit. Again, we finished the day with beeeeeers and celebration.

This was completely unplanned on my part. It just so happened that I had a trip to DC for work scheduled on Wednesday and Thursday of that week. After realizing that I didn’t have any meetings back in Chicago on Friday, I decided to extend my trip through the weekend to visit with my twin sister. She had just returned from Peru (she climbed Macchu Picchu! What what!) and I was anxious to see her for the first time since July. It didn’t occur to me until the weekend before I flew out that Marine Corps was that Sunday and, having realized it too late, I had already booked a flight out early Sunday morning. Sad face, I wasn’t able to spectate the race and I was mid-flight when all of the tracking updates would have pinged my phone.

BUT I was able to head out to the expo one train stop away from my sister’s apartment on Friday afternoon and catch up with those racing. Lisa and Meghan were my hotel buddies at Hood to Coast with Nuun and I was so happy to arrange a ReNUUNion with them. Lora was also there (and I proceeded to give her about 10 hugs within a 3 minute period. Sorry-not-sorry!). 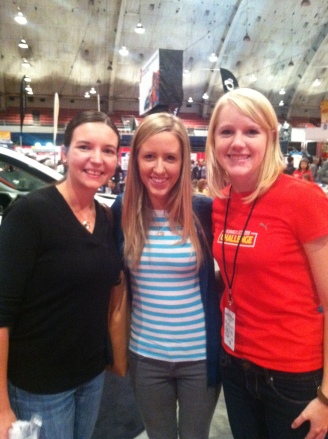 On Saturday morning, I woke up early to head out for a run with Jeff , Jess , and Maddie. Jeff was nice enough to pick me up at my sister’s place and drive us both out to Reston in his Saucony Flex (!!! Saucony-mobile FTW!). I had been running easy for a few weeks at that point and I finally felt ready to head out for an easy ten-miler with these speedy folks (Jeff ran his debut marathon just a few weeks prior in an incredible time: 2:43!—loved hearing about his experience during the drive). Jess and Maddie are just as sweet in real life as they are on social media. As we do with most runners we “know” via social media, we hugged and said “I feel like I already know you!”. I was feeling pretty groggy and creaky that morning but happy to be out running “long” on a beautiful path WITH HILLS (because they don’t exist in Chicago) with new friends.

Jess ran 10 before meeting up with us and finished up with over 20 for the day. I was all too happy to tuck in behind Jess and Jeff with Maddie and just try to breathe through the hills (heh). I told Maddie that acupuncture has helped my leg recover more than I thought it would and I was surprised to hear that she’d found a lot of relief from it too. Even after just a few sessions, I would definitely recommend it to runners dealing with pain that’s pretty localized or “knotty”. Acupuncture was only recommended to me by 2-3 people but I’ll definitely be using it in the future. After the run, we warmed up & chatted over coffee. The beautiful thing about conversation with runners is that it’s always ‘easy’ despite being in different places with our training. Jeff was (arguably) still  ‘recovering’ from the Maine Marathon, Jess was weeks away from Richmond at that point (and READY TO KILL IT NEXT WEEKEND!), Maddie is returning strong from a hip injury, and I was dealing with that silly quad/hip issue. Running 10 with these crazy kids was a highlight of my weekend. 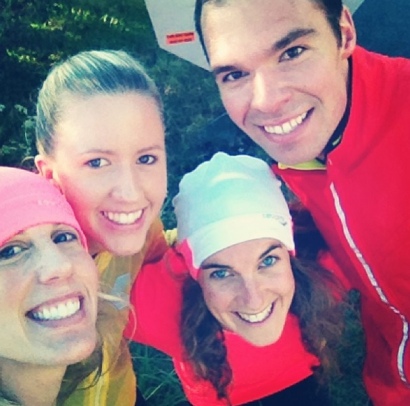 The power of social media and the extremely kind running community, I tell ya! A run with “strangers” in Virginia wouldn’t have happened if Jeff hadn’t organized the meet-up and if Twitter didn’t exist. It’s pretty incredible when you stop and think about it.

And the Monumental Marathon was November 2nd.

The third weekend away from Chicago and I was happy to be going to my hometown, Indy. The Monumental Marathon was my back-up race when my quad started to give me problems, but I gradually realized that it wasn’t in the cards. I decided to sign up for the half marathon and decide whether to RUN or RACE it in the weeks leading up to that weekend. Welp, racing wasn’t going to happen. I may have been “able” to race it (my half marathon PR pace is way too close to my marathon PR pace) but at what cost? I decided to run it.

I also had another motivation for going to Indy. A really good friend from high school was running his first marathon there. We haven’t talked as much in the past 5-6 years as we would have in a perfect world (we’re both crazy busy afterall) but I knew it would be just like we had seen each other yesterday once we saw each other in real life again. And I was right. Bo’s training was really consistent and I knew that it would be a good day for him. We ran a shakeout on Friday afternoon before heading to the expo where I was finally able to meet Mark Hadley in person. He and Alana were speaking at the expo about Alana’s training and race progression. Still amazed that Alana ran a 2:41 at 16 and qualified for the 2016 Olympic Trials. (!!!!!)

The next morning, I ran the first 7 miles with Bo. My big job was to prevent him from going BALLS OUT too early in the race. I was determined to hold him to 8:10-8:20 pace and he knew he could run each segment of 5 miles progressively faster on a few conditions—1)  he felt smooth and controlled 2) he could reach Mile 20 and still feel fresh, like he could truly race the last 6.2 miles. We took some ridiculous photos at Mile 5, I gave him some advice near Mile 6.5 when we spotted his family for the first time, and I split from him at Mile 7. 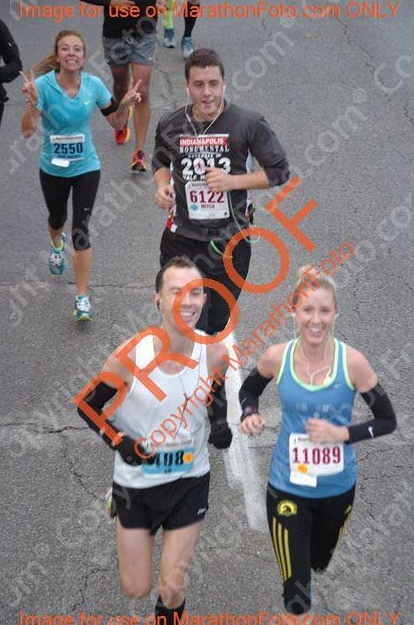 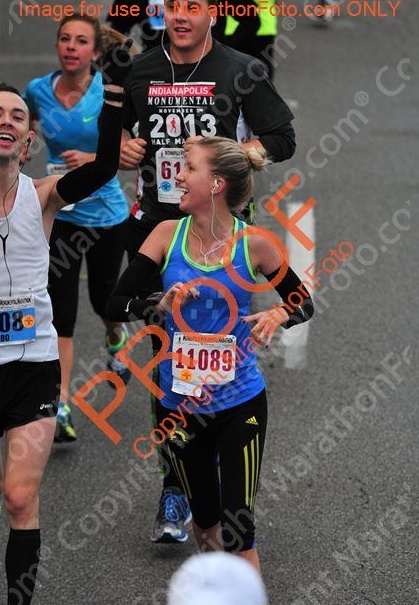 We were pretty energetic and crazy about 0.2 seconds before the photographers snapped these shots. They still crack me up.

Ok, so you know when I said I’d just RUN the half marathon? Well, I decided that wasn’t happening. The more I thought about that finish line, the less and less enjoyable it sounded. Not because I’d be in pain, but because it wouldn’t really be rewarding. Call me stubborn but I didn’t want to cross any finish line this fall if I wasn’t truly racing, no matter what distance. It seems like “dropping out” of a half marathon would be a hard decision for me to make but really, I made it within seconds of reaching Mile 7. My plan was to run back to the start line (which was 3-4 miles away), go to gear check, warm-up, and  look forward to seeing Bo at the finish line of his first 26.2. So I ran 10.5 miles total for the day, grabbed coffee with a friend, and celebrated with Bo when he crossed the finish line in 3:37:17 like the badass that he is. 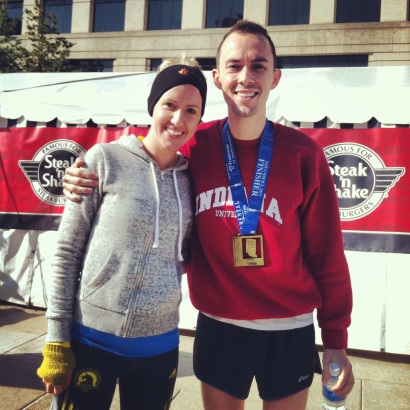 3:37 first marathon–happy to be a small part of his experience

This fall has been about supporting people in my life—whether they are relative strangers or very close friends, both new and old. I had no idea October was going to be so full of spectating but I’m glad it was. The urge to race really faded when running became more of a chore toward the end of this last training cycle. But spectating through rest, recovery, and cross-training has filled me with the urge to RACE like I’ve never raced before on April 21st.  I think I’m even more determined now than I was at the beginning of the Grand Rapids cycle, which is somewhat telling. I still have my “moments” when it stings to think about the fact that a marathon didn’t happen last month. I think about it less and less each week. I’m feeling a bit more patient and I know that I still have plenty of time to cross-train and base-build for a good Boston training cycle (A few weeks ago, I was obsessing over the fact that I needed to start base-building—-and then I looked at the calendar and realized I was being silly.) It’s still frustrating. Case in point: A few weeks ago, I was walking to lunch with The Man when I stopped and said, “I want to run f***ing fast again”. Without missing a beat, he said “You will”. And so, I will. And I’ll be especially happy I was able to be part of three different marathons & several friends’ experiences.

I experienced Chicago, Grand Rapids, Marine Corps, and Monumental in a whole new way this fall. I’m ready to love the experience of training again.

So, on that note, send me your spring half marathons suggestions! I need a good tune-up before Boston!