This past weekend was all about running. Saturday? Beer run. Yep, beer run. 4 bars, 3 miles, and just a few beers and plenty of water to stay hydrated.

After more than a few attempts, Hillary and I (somewhat) nailed it.

On Saturday night as I prepared my race outfit and packed my bag (unnecessary for a 5k, I know), I felt tired but anxious. Every 15 minutes, I kept telling myself that I’d go to bed “in 15 minutes”. I was a bit tired from runnin’ around most of the day and a horrible night of sleep on Friday, but didn’t feel like laying down.

I went to bed at 10:30 and all of a sudden, my 4:55 AM alarm went off. Up and at ’em. I ate my oatmeal, sipped my coffee, and went downtown. (I was surprised that I was riding the train with several women who were wearing bibs for the half, which started 20 minutes before the 5k. There’s no way they made it to the start line on time!)  Hillary and I planned to meet around 6:15 AM, which meant we’d have just enough time for a quick warm-up before heading to the start line.

My goal was to start off at 6:30 min/mile pace and see if I could go a bit faster each mile. 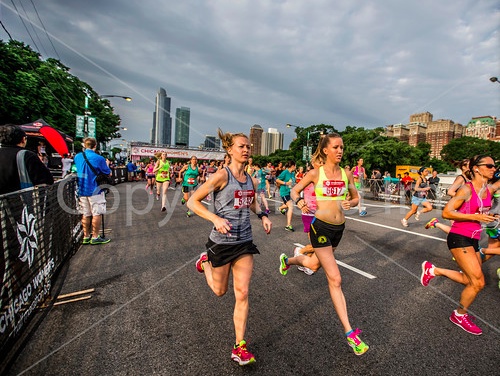 The start wasn’t crowded because it seemed like a relatively small field (not sure how many 5k finishers there were). By a quarter mile in, I was running by myself with girls 10 yards ahead and behind me. The tunnel of heat on lower Wacker was an unwelcome surprise but I felt like my legs were moving well. I had flashbacks of the Chicago Marathon and the lines of dudes peeing in the tunnel, which is something I’d rather not be reminded of (heh…).

We made a right turn heading south and I still felt like I had it together. Wasn’t sure yet whether or not I’d gone out too fast or whether or not I could trust my watch after the tunnel section. The course was clear and running south on Lakeshore felt smooth, but my legs were really starting to feel it. It didn’t help that the sun decided to pop out and say ‘hello’.

Around Mile 2.4 I stopped to walk for 10 seconds. Yeah, walk. I was instantly disappointed in myself. Looking back on it, I’m not even sure why I slowed. I know I was tired and the humidity wasn’t helping. My legs felt like they were wading through sand even though I was still on pace for a PR. If I had just kept my legs moving I would have been fine. It was a mental rather than a physical decision to stop. My body was tired, sure, but it was my head & heart that allowed me to stop in the first place. Something to work on.

The downhill section heading into the Roosevelt bridge underpass at Mile 2.7 was a nice push. And then I quickly realized that the next 300-400 m would be uphill to make the final right turn to the finish. I pushed myself up the hill. Honestly, I was surprised that I had any kind of finishing kick. The previous half mile felt like a total slog and I didn’t think I’d have it in me.

I can’t believe that I finished 7th. I was disappointed but I know that a sub-20 5k finish is in me under better race conditions. 75% humidity is no friend of mine. I’m especially happy that I was able to come so close to a PR this early in this training cycle. (I told Coach I’d rather run a marathon than a 5k any day, but I know it’s only a matter of time before I come around to a speedier short distance race.)

I’m usually not a “mantra” kind of person. I’m pretty sure I’ve never used one intentionally, but Friday night changed that. Andrew WK tweeted this and I quickly realized it would be perfect motivation during a race to keep going:

(I was shocked that Andrew WK actually responded.)  So, I now have two mantras to choose from: “Push yourself past yourself” or “PARTY HARD AND RUN HARD, JENNY!”. I haven’t decided yet which one I like more but I know I’ll be using them both at some point. 🙂