I’ve smiled more in the past two days than I smiled all last week. There’s a lot to be said for a few good nights of sleep and a new mindset thanks to a clear schedule last weekend. I tried my best not to put anything on the calendar or think about what time it was (note: avoiding a clock is harder than it seems!).

Post-marathon recovery is going well. I think my legs are confused at this point. They’re restless at times, heavy at times, and some sort of mixture between those two at other times. It appears that reverse taper madness is alive and well in my world. It seems like Boston was more than 9 days ago. A lot has happened since then. I was looking at the calendar last night and realized that April is GONE. When did *that* happen?!

Hillary made my day when sent me a link to this month’s Chicago Athlete. Turns out I placed 21st out of 50 of the women from Illinois racing Boston this year! :Mind=blown: It’s really cool to see the locals represented at Boston and my name among them. Cheesin’! 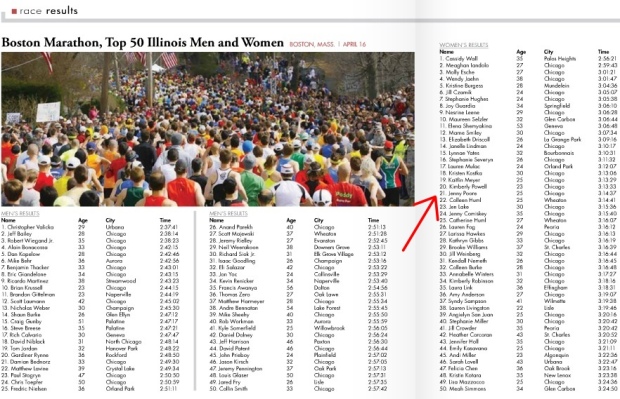 So…what’s “next”? I haven’t gotten there just yet. I know that I want to take 4-6 weeks off of a consistent training cycle for some easy miles (and impromptu fartleks). I started daydreaming about more spin classes while I was working the other day so that will probably happen too. I’m looking forward to a bit of a change of pace and rest, but I know that once I get into that rhythm it will likely change. I can only rest for so long before I get antsy to put another race on the calendar. I’m sure I’ll do 1-2 half marathons this summer just to get to a start line.

For now, the only event I’ve committed to is …..

Hood to Coast with the #NuunHTC team in August!

After a cancelled and rebooked flight from Boston last Wednesday, I really needed something to smile about. I submitted a silly video application to the Nuun team on a silly whim a few weeks ago and honestly didn’t think I had much of a chance of being selected. (If you have seen some of the other applications, you know what I’m talking about!) I’m really looking forward to an adventure and connecting with badass ladies from across the country. The ultimate bonding experience is in a sweaty, smelly van, right?! I’ve already decided that I need to work on my vuvuzela skills.

Beyond August, I will definitely be running a fall marathon but I haven’t decided which one yet. Grand Rapids is high on the list mostly because of the beer options afterward. (Duh).

Speaking of R-E-S-T (my body says, “what’s that??”)! Last night I officially booked a VACATION. In the words of the Man, “Even though Jenny and I just got back from an “adventure”, We just booked another one with more SUN and SAND and Exotic Appeal.” I.cannot.freaking.wait. I need time to unplug, drink countless margaritas, and read silly beach novels. If I do anything more active than that, it will be because I was forced to. I booked the trip last night and I’ve already started thinking about what I’m going to be packing in my suitcase. Definite sign that I need some R & R.

To those of you running Eugene this weekend, KICK THAT RACE’S ASS!! If you begin to lose momentum, just remember…I’ll be tracking you! Don’t let the internet down!

How much time do you take to recover after a marathon? What tips do you have for a Hood To Coast noob? How far out do you plan your races?

26 thoughts on “A Few Reasons To Be Happy”