This week really was Snot Central. I’m feeling pretty mopey about it right now but that’s nothing that a big mug of coffee and some rungry therapy can’t take care of easily this afternoon. Monday through Thursday was pretty miserable in terms of how I felt. I don’t get sick often but I tend to be a big baby when I do. A full work schedule was tough and focusing on my computer screen was probably the toughest challenge of the week.

On the other hand, I think it was actually pretty lucky that I was sick this week because I had easy runs on the schedule to prepare for Sunday’s 10k Race. Dealing with a head cold during a stepback week is something I can handle. I just wish I didn’t have to. But again, as Coach says, “better this week than the week of Boston”. He speaks the truth.

This week I ran just over 34 miles, which is the lowest I’ve run all cycle but not far off from the mileage Coach scheduled for me.

Monday: 6 miles at 8:39 pace. This was a struggle especially because the cold hit me on Sunday.

Wednesday: Easy progressive 7 miles at 8:17 average pace. Started at 8:27 and finished at 8:00. Felt good to sweat out the cold and breathing didn’t seem to be much of an issue that day.  (+ core and foam drills)

Thursday: 8 miles, 8:23 average pace. Actually felt really good today. I woke up feeling like a human again and didn’t have nearly as much nasal congestion as I did any of the other days this week. (+ core routine)

Sunday: WACKY 10K Race. 43:xx unofficial time (official results aren’t posted yet. derp!) 2 mile warm-up was actually nice and easy. I didn’t have much trouble breathing and it was so nice to run in the sunshine.

For my first 10k race, I’d say I did pretty well but this didn’t go as planned. The plan was to start at 6:40-6:50 and gradually get faster (or adjust to deal with conditions). I realized during my warm-up that it likely wouldn’t happen because the first (and last) 3/4 mile was a complete SHEET of ice (not kidding). This portion runs on the inner path and is made of packed sand—so they couldn’t plow and I’m sure salting really didn’t do much because the ice had accumulated throughout this week’s crazy weather.People were slipping and sliding all over the place at the start and I was in “no man’s land” from mile 1.5 to the finish.

My legs felt fresh but I had a lot of trouble breathing. The lingering chest congestion from my head cold this past week made it really difficult. Anything under 42:00 was ambitious, when you consider how I was feeling and the course conditions. I think I’ve only stopped to walk during one race before (shameful) but today I had to stop several times to take care of mucus. Blech. Still, a good workout–just a long tempo workout in the books. It was a perfect day for a race with sunny skies and light wind. I only wore two long sleeve layers and skipped wearing an outer shell jacket.. –Just wasn’t in the cards today. A bloody mary and huge breakfast burrito afterward made me feel better.

You can’t really tell how icy the finish was in the video but it might give you an idea. Surprised my form looks so good considering how I was feeling. I think I was just angry at the conditions by that point haha.

I’m going to take this week in stride (heh…get it?) and write it off as a recovery week. All of my runs were easy runs just as planned even if I didn’t hit the exact mileage. I know it was worth the extra rest and recovery so I can dominate the next 6 weeks. 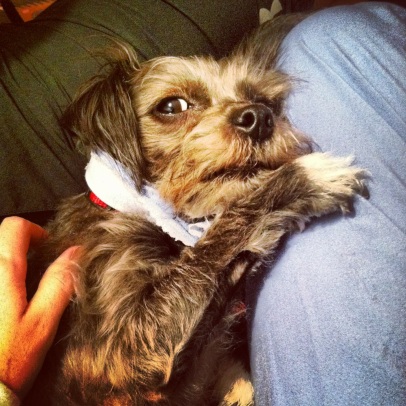 This is the look the pup gives me when I don’t pet her enough. Drama queen! 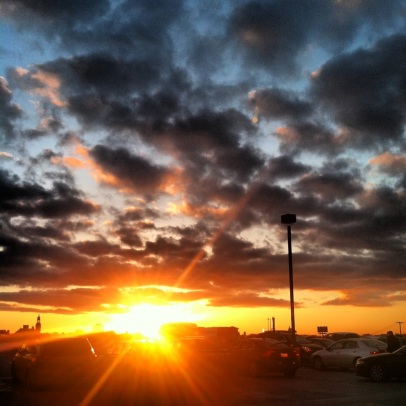 This sunset, brought to you by the Whole Foods parking lot. Transported me back to the summer on our rooftop 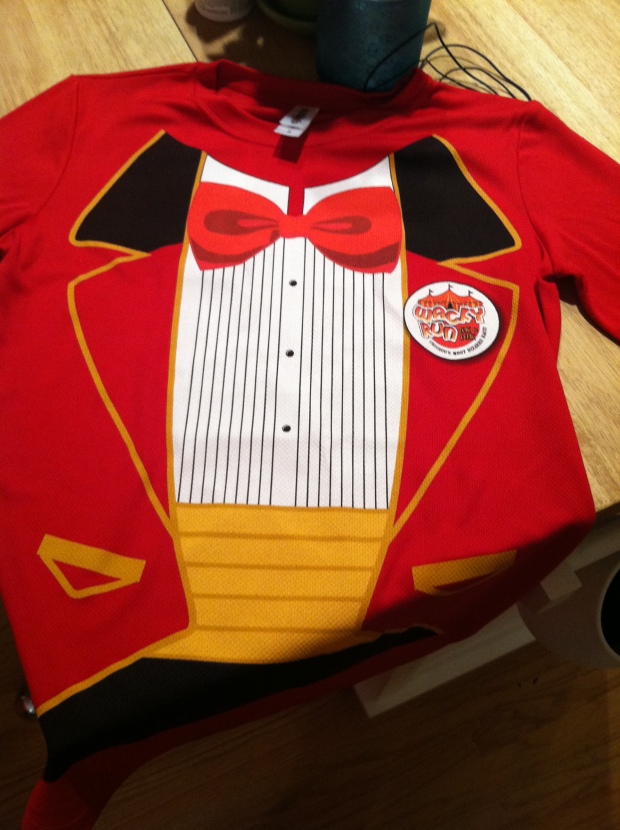 I present to you this weekend’s race shirt. I mean, the race is called the WACKY 10K—the shirt is appropriately designed, don’t you think?

I can only imagine the looks I’ll get on the lakefront or at the gym. 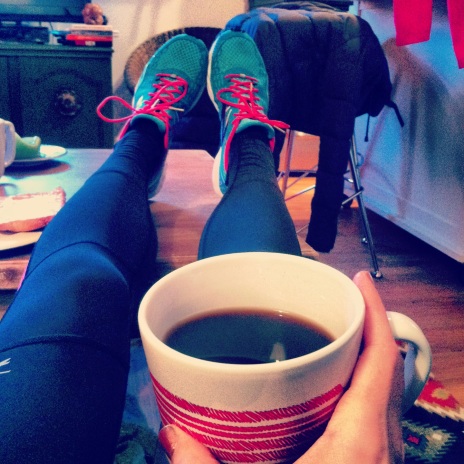 Late start times during the winter is something I could get used to. Ahhh coffeeeee!

What do you do to snap yourself out of a funk? What’s your best cold remedy?