I’m playing catch-up…again! As I mentioned in my last post, I had a lot going on in the past week and a half.

It was a long week and after only being at the new apartment for 4 full days, I am beginning to feel comfortable. New place= fresh slate and the onset of Jenny’s decorating frenzy. Yes, it has begun!

So in the middle of all of that, I managed to get my runs in last week. This week was probably the most difficult week I’ve had in awhile. I put in some serious mileage and felt like an insomniac at times, but I think that’s pretty typical for anyone trying to hold down a full time job, moving, and running all at the same time. I give myself props for this (although, Iwasn’t in the mindset to give myself props for it last week.)

I ran approximately 39 miles last week. It’s a record for me. (Even though I ran my long run on Monday–Labor Day–I’m going to pretend it happened on Sunday because DUH it felt like a Sunday!) I finally hit the 700 mile mark since I began my training at the beginning of February. Kind of an insane number when you think about it! And I’m only just beginning.

After running my first 20 miler the Saturday beforehand, I knew a shakeout would do me good. Despite the apartment looking like a mess and knowing that I needed to get those boxes filled of all my belongings, I went out for a short jog. Nice and easy.

Repeats can be daunting sometimes. Speedwork is always tough, especially on a Tuesday when you feel like you still haven’t jumped into your week full throttle yet. I decided to get a full night’s sleep on Monday and slept in on Tuesday, which pushed my run to Tuesday evening. I had a really difficult day at work–my motivation to work hard was totally zapped due to some commission technicalities and I felt helpless and useless. In the afternoon, when I was feeling pretty low, I knew that I was run the s*** out of these repeats. Yup, I always run fast when I’m mad. But when I got home, my energy was completely gone and I had to struggle to get myself out the door. I pushed through these repeats, but didn’t feel particularly speedy. That’s for another day.

At this point, the apartment was TRULY a mess, with moving day coming up on Friday. Boxes were in the hallway, furniture was askew in the living room, the kitchen was mostly packed up, and I couldn’t wait to get OUT. I managed to get up before work to run, knowing that I wouldn’t have the time or motivation that evening. So, the goal for this run was to find a groove as close to 8:00 min/mile and stick to it like glue (thanks, Coach). 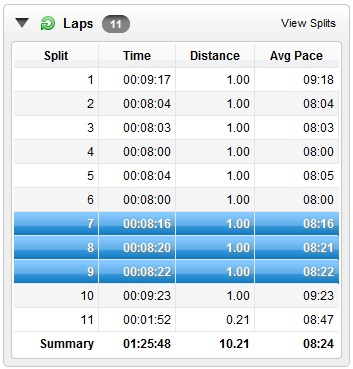 Double digit runs during the week, especially before work, are not the norm for me, but according to Coach I better get used to it. After all, I only have a few more weeks to run run run before the Chicago Marathon.

This run ‘almost’ happened on Saturday. And then it ALMOST happened again on Sunday. But then..it didn’t. My legs were zapped after standing for 6+ hours at North Coast Fest on both Saturday and Sunday and I knew I didn’t want to just struggle through it. Afterall, Coach let me run this one fast!!! (and totally abandon the 1 minute + goal pace for long runs–what a rebel!). It was my first run from my first apartment and I enjoyed taking in the new sights and coming to the realization that I was starting fresh and that my new view of the city was just as beautiful as I imagined. At mile 4, near the Oak Street Beach “S-curve”, the waves were crashing into the break wall on the trail. Some runners nearby and I had a laugh together as we sped up to avoid letting the cold waves catch our feet. All the way south along the lake, the waves were my entertainment. Just south of McCormick Place, the waves were crashing and spewing 25-30 feet in the air. I really wish I had brought my phone with me so I could share with you what this looked like on my run. The air was so fresh and crisp–fall is definitely in the Chicago air! After a not so graceful fall at mile 16 near some sidewalk construction, I finished 17 miles at a consistent 8:25 pace and went on with my day. Like nothing happened. Oh, but it did!

After that, I had friends over and we took in my new view of the Chicago skyline. All the hard work is paying off, in more ways than one. Running this past week didn’t take a backseat. It was hard, but it also kept me level headed and prevented me from becoming frustrated with packing my life into cardboard boxes one at a time. 39 miles and a 17 mile training PR. I’ll take it!

My new view. I don’t think it will ever get old.

I’m running the Chicago Half Marathon this weekend. My plan until then is to get in two solid training runs, settle into my new apartment even more, rest, hydrate, and cook some delicious meals in my new kitchen. 🙂 Have a good week, everyone!