This update is late! The days are getting ahead of me. Running is still a priority, but packing up the apartment to move this Friday is taking a toll on my ability to tell y’all about how I’m doing.  Woopsies! I promise to be better in the future. …At least, after I get settled into my new place and unpack all those darn boxes. In all honesty, that might not happen until after the marathon. 🙂

So, to recap: last week I ran 17.5 miles, which is the farthest I had ever run. And I did it in the Oklahoma City heat while traveling to surprise my sister. It was a good weekend to say the least. Even after traveling I started off the week determined and was able to stick to the plan.

Crisp, fresh air this morning as the sun was coming up! The plan called for appropriate warm-up, 1 km repeats with jogging recovery, and appropriate cool-down. I tried not to focus so much on the pace on my Garmin and instead on what that pace felt like in my legs. It was a difficult workout but I was able to keep a steady-ish pace:  4:21, 4:08, 4:06, 4:14.  Lost track of my target pace, which actually should have been 4:15-4:20 but I’ll take it. Slightly longer recovery than coach wanted, so it’s probably a good thing I pushed the pace a little.

Splits for middle miles were:
8:12, 8:08
7:49, 7:50
7:31, 7:25
I felt great during this run and it wasn’t as difficult to hold the 7:30 pace as I thought it would be. Warning: RANT!l. There were several dog owners out on this particular morning that need to learn how to handle their beloved dogs. Granted–it was between 5:30 and 6:00 am in the morning and they were walking down the sidewalk in their pajamas. What I don’t get is how they can be surprised when their dog freaks out by a runner trying to get by. I swear, I almost got my heels chomped on by two poodles and a bulldog—all with no “sorry” from the pet owners. Silly people! I wonder if my backwards running to avoid the dogs’ chomps factored into my average pace at all. 😉

Coach let me go long this weekend! Luckily, Sara B. asked to meet up with me this weekend and do a portion of our 20 mile LSD together. We ran the first 7 together and had some great conversation that made the miles pass by quickly, then we ran the last 13 miles solo. Miles 7-16 were smooth sailing. I was feeling strong and steady. I’m glad that Sara and I decided to run south from Millenium Park instead of north so that we could take advantage of some shade. It was a hazy kind of sunshine and the humidity was a bit higher than I expected (I’m getting used to this new fresh, clean ‘fall’ air we’ve been having!). We literally ran to where the sidewalk ends near the South Shore Cultural Center/Golf Course. I had no idea that this was the end point of the Lakeshore Trail until that day. I passed Sara and she told me that she just turned around, so we planned to make up the distance once we ran back north to Millenium Park. I took 3 Gus during the run and took full advantage of the water and Gatorade stations sponsored by Fleet Feet. I haven’t had stomach issues with Gu since I started to use them in May for all of my long runs. Now I can’t imagine running 12+ miles without nutrition, which is great. During the last ten miles, I tried to keep my eyes off my Garmin and run the pace that my legs wanted to. Ended up running a much faster pace than I intended, but I felt great.

I think this photo is pretty funny. And to think…I ran that before 9:30 am on a Saturday!!!
Afterward, Sara and I went to Intellgentsia for some iced coffee before parting ways. I made it home, showered, and immediately plopped myself in front of the TV for a long icing session and a movie. I’m not sure if this is normal, but I spent the rest of the day feeling like an insomniac. I ate a full meal, drank plenty of chocolate milk, and rehydrated. For the next 4-5 hours I tried unsuccessfully to sleep on the couch and in my bed and …again on the couch. I laid in bed for an hour and a half and managed to fall into a deep sleep for about 10 minutes before waking up again. Finally, at 4:30 I gave up and drank a beer instead. 🙂 Does anyone else have post-LSD insomnia?! 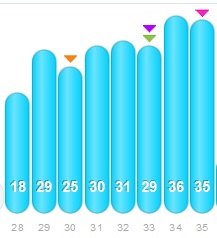 Despite only running 3 times last week, I ran a total of 35 miles and feel really comfortable with the work I put in. On Sunday, my legs were heavy but definitely not ‘sore’. This week is moving week and I think it will be hard to get my runs in but I know I can do it. Looking forward to a day off of work on Monday and a chance to unpack, sleep, maybe paint the new place, and get settled!
As of today, there are 12 days until the Chicago Half Marathon and 40 days until the Chicago Marathon!
-J