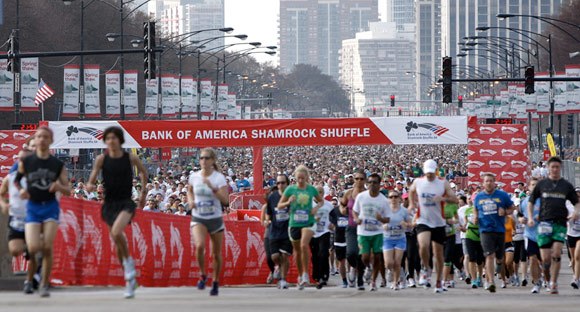 Race #2 of my Chicago Marathon training season was last Sunday in Chicago. I had never run the Shamrock Shuffle before and remember always wishing I had registered in time to be able to run it. It seems to be one of those races that pulls people from all over the Chicagoland area and I can definitely see why. Most of the races in the city take you up and down the lakefront–and while this may be gorgeous and the breeze is nice at times, it does get sort of mundane if you run a lot of races throughout the year. The opportunity to run on open terrain throughout downtown streets was a welcome change.

Race Day Morning did not go as well as I had hoped. I had everything prepared and ready to go the night before. Clothes set out. Check. Bag packed. Check. Breakfast ready. Check. Coffee make queued to brew. Check. Phone Charged…….Check? Alarm set….Damn it!!! So it turns out I set my alarm for Saturday instead of Sunday–a somewhat rookie mistake. I woke up on my own at 7:30 am with a deadline to get to the American Cancer Society tent for a DetermiNATION photo op at 8:15 a.m. THAT was surely not going to happen. Luckily, I was able to make it to the park by about 8:25 a.m, but the time did not allow wiggle room when it came to saying hello to my fellow DNation runners. I was pretty disappointed, but I knew I had to focus on getting myself psyched for the race.

The second issue–the phone! Due to yet another rookie mistake, I thought my phone was plugged in, but it turns out the USB side of the cord had come unplugged from the actual charger. When I woke up in a fuss and looked at the time, the ‘Charge Your Phone’ message popped up. Because I was in such a hurry and cursing my own error in A) not setting my alarm correct and B) not charging my phone, I didn’t think anything of it and started to throw on my race day clothes.

Despite these setbacks, I felt prepared once I got to Corral A and started some light stretching. I knew it was going to be a difficult race when I went outside and was already sweating by the time I go to the part. It was going to be HOT. And hot it was! I think it was over 70 degrees by the time we started. The first half of the course had a decent amount of shade and felt pleasantly cool, but the second half was in direct sunlight–not cool.

I went out way too fast for the first two miles. While I may have had the training to back up a 7:30 pace for the entire Shuffle, I wasn’t “feeling it” that morning and after all that had happened before I go to the start line, I wasn’t as pumped as I had hoped I could make myself be. By mile 2 I was at a total time of 15:00. Not having my phone and the Runkeeper cues at every kilometer really make me struggle to keep a pace I could keep up with for the entire 8k. Note to self: always always always make sure the phone is charged. I had a good back up though! My boyfriend djs in his spare time and he had a shuffle powered up and ready to go with songs that were sure to make me forget all about how exhausted I was or could be.

After walking a bit at the 3rd mile and wishing I had made the time for a port-a-let break, I pushed through to the finish line with absolutely no juice left in my system. I finished with an official time of 38:50, a 7:46 pace overall which is entirely impressive to me as I look back on the race as a whole almost a week later. After blasting through the first two miles, I was sure I wasn’t going to meet my goal of 37-39 minutes. But alas! I did! Here’s to another milestone down and the next goal pointed towards the Flying Pig Half Marathon in Cincinnati on May 1st! Just 16 days away!!!

3 thoughts on “I Shuffled Through Another Milestone”