“This may be the last note I ever write to you…,” I wrote on a postcard to my sister, as I tried to warm up and regain some energy at the Laban Rata rest house on Mt. Kinabalu. I had hiked up the first part of the trek to the summit earlier that day and was exhausted already thanks to the steep ascent and high altitude. 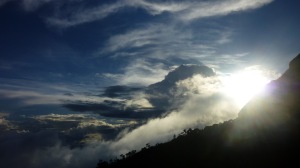 As I looked out the window and saw the peak rising up out of mist and then flipped over the postcard to study the rope course I was going to have to manoeuvre in just a few hours at 3 am with only a headlamp for light, I wasn’t sure if it was altitude sickness or the thought of what I was going to have to do that was making me feel slightly nauseated.

I spent a fairly sleepless night in an uncomfortable bunk bed, waiting for the 2 am alarm with trepidation and anticipation. When I did sleep, I kept having a falling feeling, and would wake up after dreaming about multiple ways I could have fallen off of the mountain – both on the ropes course and while trying to climb back down the 70% slope I’d hiked up the day before.

Of course, once the alarm sounded, I just wanted to roll over and go back to sleep, but we set of at 3 am with our guide. We hiked up past the tree line, got past the initial ropes course, and started walking up the flat surfaced, but inclined rock leading us to the top. Our guide (my new hero) noticed how petrified I was and held my hand all of the way up, directing where I should place my feet for the best grip. I’m pretty sure that I zoned out for part of this, so that I didn’t have to think about what I was doing. Looking back I’m not sure if it was a good idea (because I didn’t panic) or a bad idea (I was zoned out while climbing a steep mountain…so many things could have gone wrong!). We made it up to the summit in time for the sunrise, which was absolutely stunning.

The sun started to spread over all of the clouds and other jagged peaks below our vantage point started to catch the light; it was an awe-inspiring view, and worth the struggle, both mental and physical.
Unfortunately, my dad said he would not pay for a helicopter to pick us up at the top, so we started our descent.

By the time we made it to Laban Rata, I was feeling sick again, but I’m assuming it was due to a lack of sleep and calories, because once I had some food and multiple cups of tea with heaps of sugar, I started to feel revived. In fact, during the first hour or two of the 2nd stage of climbing down, I thought it was easier than the initial hike up. I can only attribute this to the altitude and the fact that it was noticeably easier to breathe. I made the rookie mistake of thinking we must be nearing the half-way mark away from Laban Rata, when I saw a kilometer marker and realized that I still had 4.5k to hike down. Then each half kilometer seemed to go by even more slowly than the last. By the last 2 kilometers, my legs were shaking and my knees were begging me to stop. I opened a can of Coke I’d been carrying, which tasted like an elixir of the gods, and keep going. I was not going to pitch a tent on the side of the mountain and risk some mosquito-borne disease!!
Miracle of miracles, we made it down safely, albeit with a few cuts, bruises, and limbs that were making sure we realized what we’d made them do in the last 27 hours. We spent the next 2 days at a resort nearby, choosing to lay by the pool and avoid as much physical activity as possible.

We did venture into town to see the wet and dry goods markets, but that was as much walking as we permitted ourselves. In the dry good market, I did see a big rat scurry under a clothing display and smelled plenty of unsavory aromas, so it was worth the extra exertion to go into town, just to remind myself that the majority of life in Sabah does not occur at a resort.
My parents came up with the idea to hike climb Mt. Kinabalu because it is the 5th highest point in Southeast Asia, but doesn’t require technical equipment. We have done a lot of hiking as a family, from spending over a week hiking throughout the Salzkammergut region of Austria to hiking all the way into the bottom of the Grand Canyon and back out, but nothing had prepared me for this experience. I’m in fairly good cardiovascular shape – I run just about every day and have done a few half-marathons over the last couple of years, so I wasn’t concerned about the difficulty; after all, I’d read that if you were in decent shape, you would be able to do the climb. Well, I suppose that is true, because I did the entire climb, but I wasn’t prepared to be practically incapacitated for the next 2 or 3 days because my legs were so sore. If I ever do this type of hike again, I am going to do a lot more hill or mountain work beforehand!
-M